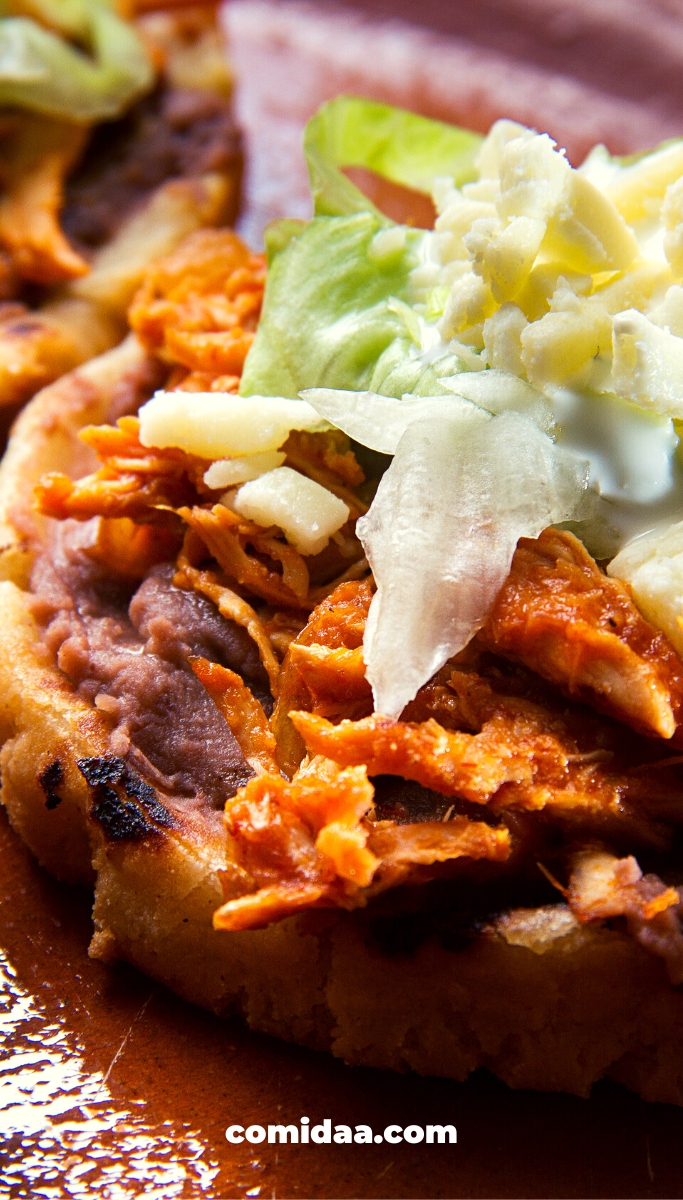 If you like Mexican food you’re going to looove sopes.

Whether it’s weeknight dinner or a Cinco de Mayo celebration, this authentic sopes recipe is fun enough for dinner or a party.

Grab your apron and get ready to learn how to make the best Mexican sopes you’ve ever tasted, seriously!

Add optional sauces, guacamole, and seasonings according to your taste.

Sope is a traditional Mexican dish that are typically made from a dough made of masa harina (corn flour) and water.

They are similar to small, thick corn tortillas, but with a raised edge, like a small bowl, to hold the toppings.

The dough is fried or toasted, giving them a crispy texture on the outside and a soft, moist center.

Sopes are typically considered to be a street food, but they can also be served as an appetizer or a side dish.

They are often served with a variety of toppings, and are a popular choice for parties and events.

Sopes are very similar to another traditional Mexican dish called “totopos” or “gorditas” which also made from masa dough and have similar toppings and cooking method.

How to Store and Refrigerate Sopes

Sopes can be stored in the fridge.

To keep their texture, it is best not to refrigerate sopes for longer than 3 days.

How to Freeze Sopes

Sopes can be frozen for later use.

How to Reheat Sopes

Here are 3 ways to reheat sopes:

Reheating sopes before serving maintains their texture and taste.

What is the history of sopes and where did it originate from?

Sopes have been around for centuries and have been enjoyed by people in Mexico and Central America for centuries. They have been a staple food of the Aztecs and Mayans, who first made them using a dough made from ground and nixtamalized corn.

What is masa harina and how is it used in sopes?

Masa harina is a type of corn flour made from dried and ground nixtamalized corn. It is used to make traditional Mexican dishes such as tortillas and sopes. It gives the sopes its traditional flavor and texture.

What are the differences between sopes, totopos, and gorditas?

Sopes are typically made from masa harina, which is a type of corn flour that is gluten-free. However, it’s important to check the ingredients list of any pre-made masa harina or sopes dough that you may use, as some products may contain gluten.

Can you prepare sopes dough in advance?

Sopes dough can be prepared in advance and stored in the refrigerator for up to 24 hours. It is recommended to cover it with plastic wrap or store it in an airtight container to prevent it from drying out.

How do you know when the sopes are cooked through?

Sopes are cooked when they start to puff up and have a golden brown color on both sides. You can also press gently on the center of the sope, if it feels firm and doesn’t indent, it’s cooked through.

Are sopes crunchy or soft?

Sopes are typically crispy on the outside and soft on the inside. The dough is fried or toasted, which gives it a crispy texture on the outside. The texture can vary depending on the recipe and cooking methods used.

How do you pronounce sopes in English?